ADB’s 50 years greeted with mass protest at Bhubaneswar, Odisha
Bhubaneswar, 7th May 2017: “From where the poor vendor will pay a penalty of Rs. 500 for selling their goods when they are there to sell goods worth less than 500 every day to early their daily bread the protesters  asks referring to the steps being taken by the local governments to implement Smart City and other city ‘beautification’ projects, which are being financed by the Asian Development Bank (ADB) and other International Financial Institutions (IFIs).

In Odisha under the joint collaboration of Indian Social Action Forum(INSAF), All India People’s Forum(AIPF), Lokshakti Abhijan, Bhumi Adhikar Andolan and National Hawkers Federation a  mass protest has been organised at Lower PMG, Bhubaneswar on 6th May.
Thousands of people who have gathered in many places of India during this week to commemorate the 50 years of ADB. The people are raising issues related to the lack of transparency and accountability, and the impunity enjoyed by these institutions. These events are being organised parallels to the official ADB anniversary celebrations coinciding their annual meetings held currently at the Yokohama, Japan.

The protest programmes were organised in West Bengal, Jammu & Kashmir, Andhra Pradesh, Jaipur, Telangana, Madhya Pradesh, Rajasthan, Odisha, Uttar Pradesh, Assam, Manipur, and many other states. These programmes, coordinated by the Peoples’ Forum Against ADB, are part of the over 120 actions of resistance being organised, on the current week i.e. May 1 – 7, 2017, across 21 states of the country to highlight the gross human rights violations, loss of livelihood, and environmental destructions caused by the ‘development model’ being pushed by ADB and other international financial institutions (IFIs).

(On behalf the Coordination Team) 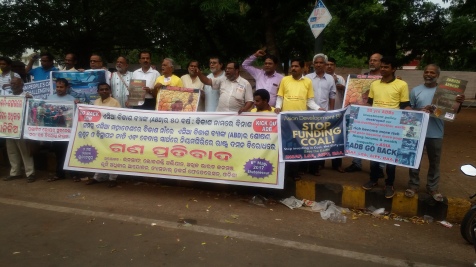